'Everything Now' is the fifth studio album by Arcade Fire, released on July 28, 2017, through Sonovox Records and Columbia Records. The album was produced by Arcade Fire alongside Thomas Bangalter of the electronic-house duo Daft Punk and Pulp bassist Steve Mackey. Previous collaborator Markus Dravs provides co-production, with additional production by Geoff Barrow of Portishead and Eric Heigle.

The album is a departure from the sound of their previous records, influenced by synth-pop, dance-rock, and other derivatives of electronic music. The result came as an album that was considered more "digestible" than their previous output. It was promoted through an elaborate marketing campaign, as well as five singles: the title track, "Creature Comfort", "Signs of Life", "Electric Blue", and "Put Your Money on Me". 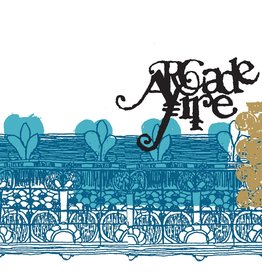 'Arcade Fire' (known unofficially as 'Us Kids Know') is a self-titled EP by the then unknown Arcade Fire. The EP was recorded in Maine, United States, during the summer of 2002. It was initially released in 2003 by the band at their shows and on their web
Add to cart
Arcade Fire - Arcade Fire EP
C$23.99

'The Suburbs' is the critically acclaimed third album from Arcade Fire, originally released in 2010. It was the Grammy Award winner for "Album of the Year" in 2011.
Arcade Fire - The Suburbs
C$36.99